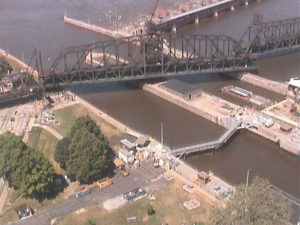 View from a Corps of Engineers camera at Lock and Dam 15 between Davenport and Rock Island.

A study finds Iowa roads would likely take a serious beating if there’s a critical problem at just one of the lock-and-dam operations on the Mississippi River.

Researchers found the failure of any one of the 25 aging locks on the upper Mississippi River could mean nearly a half-million additional truckloads of freight between the Twin Cities and St. Louis.

Most of those trucks would travel highways in Minnesota and Iowa, with a smaller number going through Wisconsin and Illinois.

The report from the University of Wisconsin-Madison says the boost in traffic would cause nearly $29 million in pavement damage on already-stressed roads.

Thanks to Bob Hague at Wisconsin Radio Network