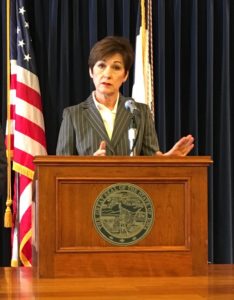 Governor Kim Reynolds today issued a news release outlining her preferred approach to state income tax changes. Her fellow Republicans in the legislature describe the document as a springboard to a larger tax cut package.

“This is the starting point…I’m sure there’ll be many changes, but I can tell you some of the things I like about it,” House Speaker Linda Upmeyer, the legislature’s top Republican, said during an interview with Radio Iowa. “…This genuinely is a bold proposal, but I like that it’s got sort of a pragmatic approach.”

Individual income tax rates would be cut by 23 percent, according to an analysis from the governor’s office. However, the outline suggests there’s some way to include “triggers” to stall the tax cuts if state tax revenue falls too dramatically or to accelerate the cuts if the economy grows.

“It seems to me that this is really a good start. It is exactly that,” Upmeyer said. “…But I really give the governor high marks for coming forward with a good, sensible approach.”

Senator Randy Feenstra, a Republican from Hull, is chairman of the senate committee that drafts tax policy and he expects to release a Senate GOP tax plan within 7-10 days.

“This is a great starting point,” Feenstra said of today’s outline from the governor’s office. “I applaud the governor and her staff for coming out with a fantastic bill. Now, it’s just a matter of taking that and creating a more extensive plan.”

For example, the governor does not call for cutting the state’s corporate income tax. Feenstra says Senate Republicans want that to be in the mix. The governor’s plan phases in the tax cuts to individuals over a six year period. Feenstra said Republicans in the Senate favor something quicker, along with an attempt to simplify the tax form itself.

“We have the most complicated system in the nation and that has to change,” Feenstra said, “so those are some of the things we’re working through.”

The House speaker said it may be prudent to wait on making a decision about corporate tax breaks until next year, as Reynolds has suggested, and focus on individual tax payers now.

“If we can find a path that provides the same level of pragmatism, maybe,” Upmeyer told Radio Iowa. “But it’s absolutely that we move forward with the average Iowan in mind first…small businesses that are pass-throughs. Your average Iowan is a priority.”

Many small business owners report the profits or losses of their businesses as personal income rather than file taxes as a corporation.

Democrats say it’s unclear whether the governor’s tax plan “will fix the state’s budget mess or make it worse.” And Senator Pam Jochum, a Democrat from Dubuque, argued any tax cuts should be targeted to the state’s low and middle-income Iowans.

“They are paying the highest percent of their income in taxes,” Jochum told Radio Iowa. “And they, of course, are also the ones who will take that money and buy things in the economy — buy an appliance, a car, a home repair, something of that nature that really does stimulate the economy.”

According to Jochum, it’s also “a mistake” for lawmakers to ignore the state tax credits being awarded to corporations.