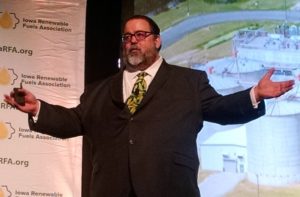 Bob Dinneen calls it “unconscionable” that Cruz is holding up the nomination of Iowa ag secretary Bill Northey to a USDA post in pursuit of RFS changes. “I get worked up about this because I think it is so wrong for Ted Cruz to put the interests of a few small refiners ahead of the rest of the country,” Dinneen said.

Cruz is simply trying to “weaken” the RFS, according to Dinneen. “The ultimate objective is to destruct demand, to reduce the RFS, to keep ethanol from being the juggernaut that it is today,” Dinneen said. “That’s not acceptable to me and I think it’s not acceptable to most people on Capitol Hill and certainly to most consumers that have benefited from the program.”

Dinneen argues, if Cruz’s objective is lowering the price of RINs, that could be accomplished by extending the RVP waiver to E15, allowing it to be sold year-round. Dinneen made his comments, in an interview with Brownfield Ag News, at the National Ethanol Conference in San Antonio.

Last week, Iowa’s two U.S. Senators took to the floor of the Senate to call for action on the Northey nomination. The Senate Agriculture Committee approved Northey’s nomination to be the USDA Undersecretary for Farm Production and Conservation back in October.

Senator Joni Ernst called Northey great friend and a great Iowan. “And most importantly, he is a tenacious advocate and true voice for agriculture,” Ernst said. “He has worked on agricultural policy at nearly every level of government.”

Northey, a farmer from Spirit Lake, was first elected as Iowa’s Secretary of Agriculture in 2006 and he won reelection in 2010 and 2014.