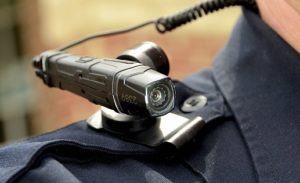 Communities across Iowa, large and small, are investing in video cameras that are worn by all on-duty law officers.

Next week, Clinton police will become the latest department in the state to have its officers go live with body-cams.

Liz McGuire, spokeswoman for Axon — which makes body-cams, recently talked to Clinton residents about how body-cams offer residents and police a sense of security.

“They want to know what happened at the scene and having a camera gives them that ability,” McGuire says, “while at the same time protecting the officer both by being able to record what he experienced in the moment and also by having that camera as a tool on his tool belt as he goes out and interacts with people.”

People sometimes behave differently when they know they’re being recorded and McGuire says if they’re more well-behaved, it’s a win-win.

Gyrion says they will treat the public release of any video carefully by following the state’s open records laws.

“Public safety is paramount to everything we do,” Chief Gyrion says, “so it’ll be a case-by-case basis whether we release it or won’t release it. We’re going to follow the law.”

Clinton has allocated funds for the body cameras as part of package with a company that also makes tasers and other law enforcement-related products.

The city council approved spending nearly $200,000 over five years for cameras and tasers. Some officers have used the new body-cams on a trial basis to help insure proper procedures. All officers are to be using the cameras as of Monday.