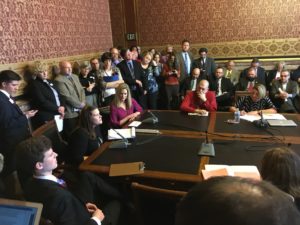 A bill that would give the parents of private school students state tax money to cover tuition and other expenses drew applause, groans and emotional testimony at a statehouse hearing yesterday. Trish Wilger, executive director of Iowa Advocates for Choice in Education, told legislators the bill will “blast the doors open” for parents who want to send their kids to a private school.

“This act goes a long way to give some parents a choice who otherwise don’t have one,” she said.

“Aren’t we here about students and what’s best for our students or are we here to shuffle public dollars off into private entities?” she asked legislators.

Kim Preston lobbies in 11 Midwest states for the Foundation for Excellence in Education. She argued competition from private schools will raise the quality of public schools.

“First of all, I think all kids can learn if they’re put in the right educational environment,” she said. “…I also believe parents are best equipped to make the choices about what fits the needs of their children the best.”

Andrew Dunn, a senior at Okoboji High School in Milford, told lawmakers that unlike public schools, private schools are not accessible to all students.

“Education has truly been one of the foundations for success in Iowa and our public schools are institutions we ought to take pride in,” Dunn said. “…Public schools should be fixed, not abandoned.”

If the bill becomes law, the bill’s sponsor says next year about $50 million of state money would be given to the parents of kindergarteners starting out at a private school and to parents who remove their child from a public district and enroll them in a private school. The bill is scheduled for debate in the House Education Committee today.