You are here: Home / Agriculture / Proposed Wright County plant would create fertilizer out of chicken manure 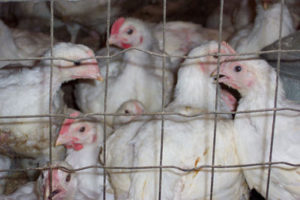 Plans are being unveiled for a $25 million fertilizer plant to be built in north-central Iowa.

Bryce Davis, Wright County’s economic development director, says the plant will be located in a rural area about ten miles from Clarion and it’ll take in up to 150,000 tons of chicken waste per year from several area poultry plants.

“They will take raw chicken litter material,” Davis says. “They will put it through their process to create a consistent-size organic material that will be both a dry fertilizer product for land application as well as a liquid fertilizer product.” The company is called ReNewtrient One. It’s a subsidiary of New Organics and Davis says it will be creating jobs.

“Initially about nine, but if they go to a second shift, it’ll go to 12,” Davis says. “We’re anticipating those jobs will have an average wage of about $24 an hour, so they will be very high-paying jobs for the area.” Construction is expected to begin soon. Opening of the plant is anticipated about this time next year. The announcement comes on the heels of the construction of the Prestage Foods pork processing plant south of Eagle Grove with its opening set for later this year.