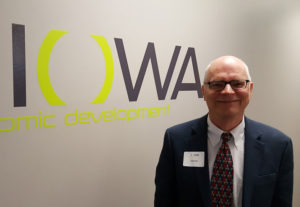 The Iowa Economic Development Authority Board, after a long delay, has granted a project in Mason City over $9 million in state assistance.

Mason City Mayor Bill Schickel says supporters of the effort to renovate the city’s downtown have been waiting three years for the action taken today in Des Moines.

“It’s time to celebrate,” Schickel said. “This is just a wonderful day for Mason City. All of our project partners are here and they’ve been doing a great job of working together to get to this day. There are a lot of steps to be taken yet, but today is a terrific day.” Around 10 people from Mason City traveled to Des Moines to attend today’s IEDA Board meeting.

The $38 million project in downtown Mason City includes a 100-room Marriott brand hotel, a conference center in The Music Man Square, a performing arts pavilion, and a sports/entertainment/retail complex. Schickel says construction on all of the projects in downtown Mason City will begin later this year and should be completed by the end of 2019.

The state assistance was put on hold for several months by the IEDA Board over concerns with a commitment from the bank that’s financing the project and changes in the project developer. Another part of the project will involve a museum dedicated to Merideth Willson, the composer and playwrite who was born in Mason City. Schickel is excited about the potential impact the projects will have on Mason City’s economy.

“This is significant for being able to attract workers to Mason City, like many communities, we have a worker shortage,” Schickel said.

In addition to the money for Mason City, the IEDA Board awarded direct financial assistance and tax benefits to companies planning expansion projects in Clinton and Norwalk. Archer-Daniels-Midland Company is working on a $196 million renovation to its corn wet milling and dry milling facilities in Clinton. Minnesota-based Michael Foods is building a manufacturing and distribution plant in Norwalk that’s expected to employ 168 people.