You are here: Home / News / Broadway musical ‘On Your Feet’ making its debut in Iowa (Audio) 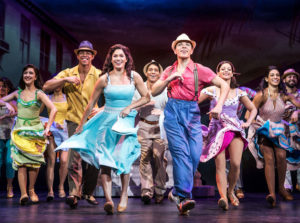 Scene from “On Your Feet.”

A popular Broadway musical about the life story of superstar singer Gloria Estefan opens Tuesday night in Iowa for the first time.

Actress Christie Prades is portraying Estefan in the touring production of “On Your Feet!” Prades grew up listening to Estefan’s music so meeting her was nothing short of mind-blowing.

“I actually met her in my first audition for the show so, no pressure,” Prades says. “We were lucky enough to have her with us for the rehearsal process for the tour. I got to really hang out with her and Emilio and get to know them on a personal level to kind of get a feel of her and who she was so I could portray her as best as I could, so I’ve been lucky.”

Estefan has sold more than 100-million records and sold out stadiums around the world. She and her producer-musician-entrepreneur husband, Emilio, have won a combined 26 Grammy Awards. Prades says it was a bit overwhelming having to “be” Gloria on-stage while the real Gloria was watching from the audience.

“In the beginning, I was very nervous but then after a while, I got to know her and saw that she was so much like myself or my family and she became more of a family member,” Prades says. “Sometime, I have to pinch myself because of the normality that it’s become but in the beginning, it was very nerve-racking and thank God I’ve gotten over that because I would’ve been a mess every time she came to see me.”

Prades is from Miami and is the daughter of Cuban immigrants. She’s been listening the Estafan’s music as long as she’s been aware. “Ever since I was little, I remember my mom bringing out the blue ‘Gloria’s Greatest Hits’ CD and she would always play it in the car and she was always telling me how this woman was an example of who we are in our Cuban culture, pursuing her dreams and striving to be whatever it is she wanted to be,” Prades says. “She was always that pioneer for me and that example.”

The schedule of a traveling Broadway production can be grueling so Prades says she’s quickly learned to care for herself mentally and physically. “I do sing about 13 songs in the show and I’m always speaking and I’m always dancing, so, I definitely treat myself like an athlete,” Prades says. “I think the challenge is to remain consistent. We do eight shows a week, so, staying consistent to keep the show fresh and to make it feel like it’s the first time I hear those words.”

The Des Moines Civic Center is hosting “On Your Feet!” through Sunday.