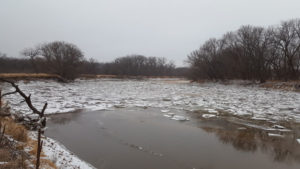 Ice breaking up on the Raccoon River in Des Moines.

Spring is still several weeks away, but the National Weather Service has released its first look at potential flooding.

Senior hydrologist Jeff Zogg says there appear to be few worries right now. “Most of the state — including the Mississippi and Missouri Rivers — we’re seeing a near-normal risk of flood across Iowa. Nothing really abnormal stands out,” Zogg says. There was very little snow on the ground until just recently, and he says that is one of the things they take into account.

“The snowpack is definitely a factor that we consider when we look at the risk of flooding in the spring. And the snowpack that we have, that definitely tended to increase the risk, because across much of the state the snowpack has been above normal,” Zogg explains. The flood risk is based on areas the normally might flood and does not include the possibility of flash flooding brought on by heavy rains.

Zogg says water levels in streams and lakes also make a difference in the outlook. “Stream levels going into the winter are definitely one thing that we take into account when we look at the risk of flooding,” according to Zogg. “Those were near normal, in some location a little bit below normal, so those tended to have a negligible impact, maybe even decrease the risk a little bit.” He says there are several other factors that could impact any flooding between now and spring.

“Future precipitation trends — if we get a lot of snow or a lot of rain for example — that would tend to increase the risk of flooding. So, we’ll just have to keep an eye on that,” Zogg says. The speed of the warm-up and snowmelt is also a factor, as a gradual melting gives the streams and lakes more time to absorb the runoff from the melting.