You are here: Home / News / ‘Our politics is broken,’ says 2020 Democratic presidential candidate in Iowa 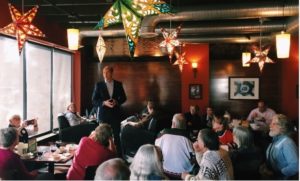 A Maryland Congressman who’s actively campaigning for president is starting this President’s Day with an 8 a.m. meeting in Bloomfield with local Democrats. By tonight, John Delaney will have visited 41 of Iowa’s 99 counties.

“I’m a big believer in life that you have to do the work,” Delaney said this weekend, “and the one thing I know for sure after meeting with Iowans in close to 40 counties is that they do the work on this.”

Iowans who haven’t seen Delaney in person may have seen him on television. He’s spent a million dollars on ads airing on Des Moines and Cedar Rapids stations. His core message to Iowans is that it’s time to ditch “hyperpartisan” politics.

“I think they know our politics is broken,” Delaney said during an interview with Radio Iowa. “I think Democrats here in Iowa really know it’s broken.”

Delaney cited last week’s indictment that accuses Russia of sowing discord among Democrats with online ads in August of 2016 that accused Hillary Clinton of voter fraud in Iowa’s Caucuses.

“What’s more concerning is everyone believes they’re going to do it again,” Delaney said. “…It’s almost like a ship pulls up next to our shores and aims a weapon at us. If a president doesn’t order the military to do something about it, it’s a disloyal act. And I think the president’s failure to direct the intelligence community and the FBI to actually try to do something about this is disloyal to the country and it’s very, very troubling.”

Delaney arrived in Iowa Saturday morning, as the nation was reeling from another mass shooting. Delaney said it’s “disgraceful” congress hasn’t even been able to limit the sale of “bump stocks” — the device used by the man who killed 57 people in Las Vegas last fall.

“Tragedy after tragedy and no response from the federal government, particularly on issues that there’s broad agreement on,” Delaney said. “…The majority of the American people, including a majority of Republicans and a majority of NRA members believe we should have universal background checks and we can’t get it done in the congress.”

The Florida high schoolers who survived last week’s shooting and have become outspoken proponents for gun safety measures may prod congress to act, according to Delaney.

“They’re going to soon be engaged in the democracy, right? All of them are getting ready to vote for the first time…If every high school in the country sets up a club to advocate for this issue, you know, we have about three million kids graduating from high school every year,” Delaney said. “It’s a big impact.”

Delaney met with Madison County Democrats in Winterset Saturday night. He was in Chariton, Knoxville and Albia Sunday. Today, Delaney has a midday stop scheduled in Corydon and he’ll meet with Warren County Democrats tonight in Indianola.