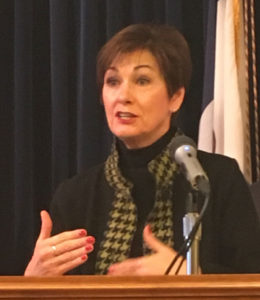 Governor Kim Reynolds used her weekly news conference today to highlight the “if you see something, say something” message — an event that abruptly with the drama of a statehouse evacuation that, luckily, turned out to be a false alarm.

“In light of last week’s shooting, we’re asking parents and students, school faculty and staff and members of the community to be especially vigilant for signs of potential violence,” Reynolds said to open the news conference.

Reynolds and other law enforcement officials emphasized calling lccal law enforcement to report suspicions that someone may be planning a “mass violence.” In a question-and-answer session with reporters, Reynolds did not embrace additional “gun control” measures at the state level — but did call on congress to enhance the federally-managed background check system for gun purchases.

“The federal government has a role to play in this. They need to look at what they can do, strengthening background checks. A big piece of this discussion lies with them and so they need to take the responsibility to do some things, “Reynolds said. “As a state, we’ll continue to take a look and review.”

Reynolds called herself a “proud Second Amendment supporter” but she would not say whether she supports proposals to arm educators or let anyone with a concealed weapons permit to carry a gun on school grounds. Both proposals are in bills awaiting action in the legislature.

“I’ve said to you about 101 times, it just don’t do me any good to speculate on bills,” Reynolds told reporters. “…There’s all kinds of criteria that could be involved in that, different nuances, so I’ll wait and see what it looks like in its final forma nd encourage all stakeholders to come together.”

The majority of Iowa schools have plans to deal with an “active shooter” situation, according to the governor.

“My daughter’s a teacher and so I talked to her this weekend and they actually have participated in ‘active shooter’ training,” Reynolds said. “…I asked her if she felt that it helped and she said she felt that it helped the students and the educators at least better understand what to do in the case of something, gosh forbid, in the case of something like that happening.”

Twenty-four minutes after the governor took her place behind the lectern, alarms sounded within the statehouse, prompting an evacuation.

“This would be one of those things — if we don’t follow through,” Reynolds said as she walked out of the room with other officials.

Sensors were triggered in the capitol cafeteria and the all-clear was given a few minutes later.

(This post was updated at 3:27 p.m. with additional information)