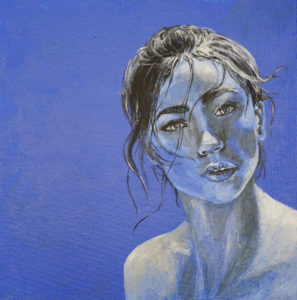 This painting by Iowa City West senior Madi Wehmeyer is one of 24 pieces of student-created art on display at Veridian Credit Union’s Coralville branch.

Dozens of young artists from ten Iowa high schools will soon have their work on view to a much broader audience.

Veridian Credit Union branches in five Iowa cities will be displaying as many as 150 paintings, sculptures and other pieces created by students from the ten schools. Julie Gage, of Waterloo, organizes the ArtShare program for the credit union.

“We thought that the students needed another place other than the school and some of the art centers to showcase their artwork and some of our branches had some blank walls,” Gage says, “so it became a nice partnership to be able to take their artwork, have it framed professionally locally, and then display it for a year in our branches.”

The program is a way to recognize and celebrate the talent of local student artists, she says. The exhibit that’ll go up in the Waterloo branch is being assembled this week.

“We’re going to have 34 2-D pieces and that can range from graphic design, painting, drawing and digitial-type pieces,” Gage says, “and then we also do a display case in our branches and that can have anything from pottery to jewelry to mixed media pieces.”

Each school’s art department teachers and leaders choose which pieces will be loaned to the credit union branches in Ankeny, Cedar Rapids, Coralville, Waterloo and Waverly. Premieres are planned at each branch over the next few weeks. Students who submit their 2-D art for a year get their works returned professionally framed, which is a nice bonus. Sometimes, customers enjoy certain pieces so much, they want to buy it.

“Right now, it’s going back to the students,” Gage says. “We do have some members that come into the offices that really like the art. We put them in touch with the teacher or the students and let them take care of that on their own.”

Veridian, which is based in Waterloo, also offers an ArtShare Scholarship for $2,000 toward tuition for an educational program leading to a career in the arts. The application deadline is April 13th.