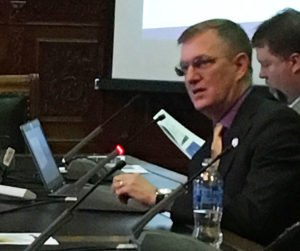 The president of the board that oversees the three state universities is promising tuition for Iowa residents will go up no more than four percent in the next academic year.

“Our job is to come up with what the families in the state of Iowa can live with,” Richards told reporters today.

Richards testified at the state capitol today as well, asking legislators for more state support of the three public universities.

“The exceptional quality at our institutions has taken generations to build,” Richards said, “and it is imperative that we work together to continue the progress made by those that came before us.”

The presidents of the three universities asked legislators to at least stabilize state support of the schools. Iowa State University president Wendy Wintersteen said tuition rates have been the same for seven out of the last 12 semesters, while state support of ISU “is trending down significantly.”

“We’ve stretched the university too thin. Our faculty and staff are maxed out,” she said. “With strong enrollment and declining state support, we are tipping the balance between efficiency, education quality and accessibility.”

“What is quite clear is that if we do not establish a plan for stable resources which are necessary to improve our quality, Iowans will be forced to pay non-resident tuition at Michigan or Wisconsin or Minnesota in order to obtain the quality they demand and deserve,” Harreld said.

“The State of Iowa really got the university systems right. There are only three institutions. We have not overbuilt our infrastructure,” Nook told legislators. “It allows us to adequately fund our universities, if we choose to do that.”

The Board of Regents is scheduled to meet tomorrow. Richards indicated a final decision on tuition for the fall semester and spring semester 2019 would be made in June.