You are here: Home / News / More snow and freezing rain expected to hit the state 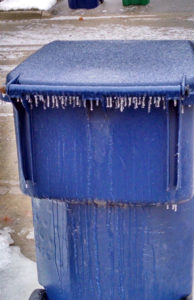 A wide section of Iowa was glazed in a thick coating of ice on Tuesday and today’s  forecast calls for more of the same — with an extra helping of snow.

Meteorologist Alex Krull, at the National Weather Service office in metro Des Moines, says the temperature is hovering right around 32 degrees so some areas of the state are seeing rain while others have freezing rain, sleet or snow.

“Up near the Iowa-Minnesota border is where we’re expecting probably two to two-and-a-half inches of snow,” Krull says. “We did have one band that moved through the Fort Dodge area this morning where we had reports of up to three-and-a-half inches of snow. That caught us off-guard just a little bit.” Central and southern Iowa will see less snow and more rain, then freezing rain as the temperatures fluctuate. Much like on Tuesday, Krull says the ice could cause serious problems ranging from dangerously-slick roads to tree damage that leads to power outages.

“We’re expecting the most ice accumulation to be along a line from Atlantic up to Ames to just west of Waterloo,” Krull says. “That’s where we’re expecting anywhere from about five-hundreds of an inch to a tenth of an inch.” It’s been a little warmer in eastern Iowa but all of the rain and melting snow in recent days has led to flooding in some areas. Krull says it appears most of the precipitation falling in the eastern third of the state today will be in the frozen form, not rain.

“They might see a little bit, so it doesn’t look like they’re going to get as heavy a rain showers as they had towards the beginning of the week,” Krull says. “The National Weather Service in Davenport has been really busy with flooding, with their coverage area in eastern Iowa and western Illinois. The rain doesn’t help out the situation but it doesn’t look like it’s going to greatly augment it.” The heaviest flooding at the moment is along the Maquoketa River near DeWitt in Clinton County.

Keep up to date with the ever-changing forecast at weather.gov.