You are here: Home / News / Senate GOP tax plan advances out of committee on party-line vote 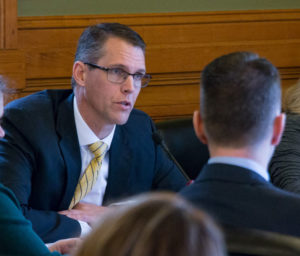 Republicans on a state senate committee have advanced their plan that intends to cut state taxes by $1 billion.

“We want to be bold. We want to be a driving factor in our economy and, more importantly, we want to give Iowans money back. Why? Because that helps grow the economy…because they can spend it,” said Senator Randy Feenstra, a Republican from Hull who is chairman of the Senate Ways and Means Committee.

The “maze” of tax credits and deductions would be reduced if the bill becomes law, according to Feenstra. The legislation would cut individual income tax rates by 30 percent and the corporate tax rate would drop from 12 percent down to seven percent. Feenstra is repeatedly using one word to describe the package.

“Yes, this is a bold plan. This is very bold,” Feenstra said this afternoon during the committee meeting. “However, we need bold to create a strong economy. We need bold create more jobs and higher wages.”

The 130-page bill was introduced yesterday and cleared Feenstra’s committee this afternoon. Democrats like Senator Joe Bolkcom of Iowa City accused Republicans of rushing the bill through without a non-partisan analysis of its impact.

“But here we are,” Bolkcom said, “so more DC-style lawmaking where people are voting on stuff they have no clue about.”

Senator Herman, a Democrat from Ames, suggested the financial impact of a billion dollar tax cut would lead to dramatic cuts in the state budget.

“We’re driving ahead at about a hundred miles an hour with no clue of how we’re going to responsibly pay for this,” Quirmbach said.

“There’s been no public input, no bipartisan collaboration, no understanding of the true cost of this measure,” McCoy said. “We literally are flying blind into the abyss.”

All nine Republicans on the Senate Ways and Means Committee voted for the bill, but Feenstra was the only one to speak during this afternoon’s meeting. During a meeting earlier today (Thursday), Republican Senator Michael Breitbach of Strawberry Point stressed his support of eliminating tax credits and deductions.

“I’ve been waiting for a long time for simplification of the Iowa tax code and hopefully we can get through it and make the changes,” said Breitbach, who told colleagues he had done tax preparation when he owned an insurance agency.

Senate Republican leaders intend to bring the bill up for a vote in the 50-member senate next week. Meanwhile, the Republican-led Iowa House is using the tax plan Republican Governor Kim Reynolds released last week as their template.