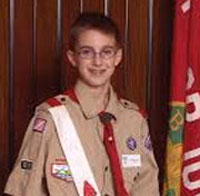 Today marks a full decade for the annual Day of Service and Giving on what would have been the 24rd birthday of an Eagle Grove boy. Aaron Eilerts was 14 when he was killed by a tornado that hit the Boy Scout camp in Harrison County in 2008.

Beth Stephas, a counselor at Robert Blue Middle School, says students at Aaron’s old school are tackling a list of projects, several which were started by Aaron. “We will have students that will be sewing pillow cases like he used to do and donating those to hospitals and care centers,” Stephas says. “We’re going to be decorating pillow cases to send to soldiers. We’ll be making dolls to send to orphanages, pet blankets to send to different veterinary clinics.” Students have branched off and launched their own community service projects which Stephas says are inspired by Aaron’s memory.

“We’ve got some projects that are going to go out to some of our senior citizens and shut-ins, some painting of pots and planting of flowers and making baskets,” Stephas says, “just a variety of projects going on throughout the day.” Stephas says it’s such a treat for the students to be carrying on Aaron’s thoughtful volunteer efforts year after year.

The Robert D. and Billie Ray Center gives out an award each summer to an Iowan who follows the lead of Aaron Eilerts in giving back to their communities during the Iowa Character Counts Awards ceremony.