You are here: Home / Crime / Courts / Gun control one of the topics at Senator Grassley’s stop in Burlington 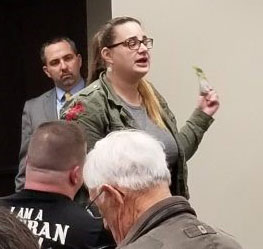 This woman spoke to Senator Grassley about gun control.

Iowa Senator Chuck Grassley spoke at the Greater Burlington Partnership this morning — with gun control one of the main topics. A woman pulled out a wallet-sized photo and showed it to the Republican Senator.

“This is my son,” the woman said, “yesterday I spoke to his teacher… and she was in tears because she is scared that she is going to be gunned down in her classroom.”

Many showed up to challenge Grassley’s stance on new gun control measures in the wake of a Florida school shooting that left 17 dead last week. Grassley said he wouldn’t support a new ban on so-called “assault weapons,” he said the 1994 ban was allowed to sunset for a reason.

“Because it demanded a study that the National Institute of Justice… to do a study whether the ban cut down on crime and murder, and that showed it didn’t,” Grassley says he is willing to consider changing things with an “intellectual basis,” however says the study “proves otherwise” for a new ban on AR-15 style rifles. 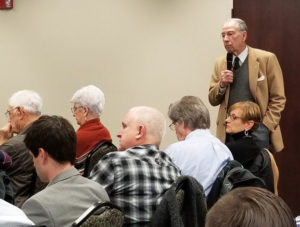 Around 150 people were in attendance for the event, in which Grassley discussed infrastructure, the farm bill, federal tax-cut, and even President Donald Trump’s tweeting habits.

“He hurts himself by tweeting,” Grassley says. “When he does something that is really good…then tweets something irrelevant it detracts from it. If he doesn’t have the approval rating he thinks he ought to have…it’s probably his own fault.” The stop was part of Grassley’s 99 county tour of Iowa, which also includes stops in Keosauqua and Wapello today.