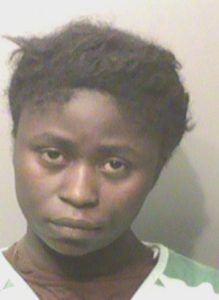 A man is dead and a young woman is in jail following a hit-and-run crash Sunday night in Iowa’s capital city. Des Moines Police Sergeant Paul Parizek says officers responded to the car versus pedestrian crash on the city’s northwest side around 9 p.m.

The vehicle left the scene, but witnesses helped police track down the 22-year-old driver. “We ended up charging her with vehicular homicide by reckless driving, vehicular homicide by OWI, leaving the scene of an accident, and two counts of neglect of a dependent child because she admitted to us that she had two small children in the car at the time of the crash,” Parizek said.

Thirty-three-year-old Matthew Otto of Des Moines was killed in the incident. The suspect falsely identified herself to police. “We received a phone call from a lady in the community who said, ‘Hey, that’s me, that’s not her. She was using my name and my date of birth,'” Parizek said.

Eventually, the suspect was identified through fingerprints as 22-year-old Oleaf Teoh. Her three-day-old and six-year-old children were in the car at the time of the fatal crash.

“There are a lot of pieces to this that really kind of take your breathe away,” Parizek said. “You look at the ages of the victim and the driver and you think, ‘man, these are two young wasted lives,’ but then you add in the layer that there were two small children in there under the care of their mother, who we totally expect is going to provide and take care of kids who can’t take care of themselves and she entered them into this environment. You know, thank God it didn’t turn out worse than it actually turned out to be.”