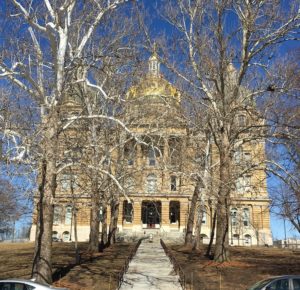 A group of state senators and some of their staff had about an hour’s worth of private training today in how best to respond to an “active shooter” situation.

“I could tell that everyone in the room, their eyes had been opened a little bit and were willing to accept and prepare themselves for something like that, God forbid that it ever happened,” Sergeant Steve Lawrence, the state trooper who led the discussion, told reporters afterwards.

If you hear gunshots, “evacuating is almost always the best response,” according to Sergeant Lawrence.

“And run as fast as you can, not in a straight line, and run until you’re safe. That’s the best thing that you can do,” Lawrence said. “If you can barricade in a secure room where they can’t break through a window or through the door, that’s a great idea…Last resort, if you don’t have a chance to run or you don’t have a chance to barricade: fight back…Fight back with whatever means you’ve got whether that be a pair of scissors, a paperweight, a coffee mug, hot coffee — anything in your hands. Fight back and (don’t) become a victim.”

Lawrence said everyone should think about potential threats, wherever they may be.

“Every law enforcement officer does that daily,” Lawrence said. “Throughout our duties, traffic stops, whatever it is — we prepare ourselves daily, so if it does happen, we know how to respond.”

Lawrence is a certified safety instructor. He’s so far met with “well over 2000” state employees and state officials to discuss that kind of “situational awareness.”