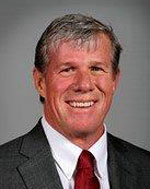 The Iowa Senate has given a green light to legislation that would ban traffic enforcement cameras. Senator Brad Zaun of Urbandale has long opposed the devices that issue tickets to vehicles caught speeding or running red lights. Zaun calls them “gotcha cams.”

“We’ve been talking about this for years,” Zaun said. “It is not fair and it’s against the constitution…where you are innocent until proven guilty.”

Zaun also objects to the out-of-state companies that own the systems, take the photos and mail tickets to the owners of the vehicles caught on camera. Those companies get a major share of the ticket fines, according to Zaun.

The traffic camera ban passed the senate on an overwhelming 32-18 vote. Senator Tony Bisignano of Des Moines, one of the opponents, said the state shouldn’t be “dictating” how cities decide how to police the streets.

“This is new technology and somewhere we’ve found it as some ‘Big Brother’ problem,” Bisignano said. “Well, there’s cameras everywhere you go.”

According to Bisignano, Iowa cities operating traffic enforcement cameras will lose about $12 million in revenue from the fines. Senator Jim Lykam of Davenport said “from day one” his city has used the money from its cameras for public safety.

“This past Sunday another young man was shot in Davenport…That’s where I want my police officers to be, solving these crimes,” Lykam said. “I will let technology deal with traffic offenders.”

The traffic camera debate now heads to the Iowa House.