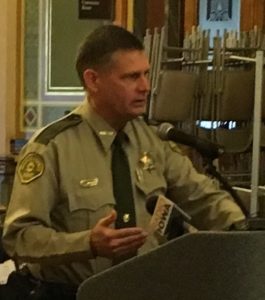 Groups and individuals calling for improvements in Iowa’s mental health care system say it appears some progress may be near. On Tuesday, the Iowa House passed a comprehensive plan to improve access to mental health care services in Iowa. Marion County Sheriff Jason Sandholdt was among advocates who were at the statehouse today to lobby senators to approve that bill.

“Our goal, with the Iowa Sheriffs and Deputies Association, is for when people have a mental health crisis, it’s just as important as somebody having a heart attack or a stroke,” he said during a statehouse news conference. “The people need the care and this bill will help do that.”

Mary Neubauer of Clive began “speaking out for change” after her son, Sergei, took his life in September. She said her son’s story “shows those with mental illnesses don’t have time to wait.”

“It’s too late for us and for Sergei,” Neubauer said. “…We have the opportunity to save lives. I want us to do better and I am not alone.”

More than 5000 people have signed an on-line petition that calls for urgent action to address deficiencies in Iowa’s mental health care system. Steve Baumert, the president and CEO of Jennie Edmonson Hospital in Council Bluffs is chairman of the Iowa Hospital Association’s board of directors. He was at the statehouse today to deliver that message to state policymakers.

“You have a chance to change lives and save lives,” he said, “and what a tremendous legacy that would be.”

Peggy Huppert of the National Alliance on Mental Illness said Iowa has reached a “tipping point.”

“Mental illness affects tens of thousands of Iowans and they’ve raised their voices in unison to say: ‘More must be done,'” Huppert said.

Preliminary discussions also continued at the statehouse today over a plan to improve mental health care services for children.