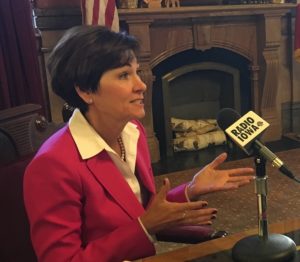 Iowa’s Republican governor today said her six-year plan to phase in a 23 percent cut in Iowa’s personal income tax rates is “done in a responsible manner.”

“I feel very good about the proposal that we put forward,” Governor Kim Reynolds said. “It reduces taxes, reduces rates and really modernizes the tax code, which needs to happen.”

Reynolds spoke with statehouse reporters early this morning, several hours before debate is likely to begin on the Iowa Senate GOP’s plan. Senate Republicans propose cutting taxes by $4 billion over the next five years. Reynolds’ plan — by comparison — would cut $1.7 billion over the next six years.

“I’m excited that we’re talking about tax cuts and we wouldn’t have this opportunity…if it hadn’t been for the federal tax cuts that were passed in December…The conversaion that we’re having today is a positive conversation,” Reynolds told reporters. “I want to make sure that I do it in a responsible way and I believe the tax plan that I put forward does that.”

There is one huge similarity between the Senate Republicans’ tax plan and the governor’s. Both do away with the state tax deduction for federal taxes. It makes Iowa’s income tax rates look higher when compared to other states than they actually are. Unlike the Senate GOP plan, the governor’s plan would place a hold on any proposed tax cuts if the state’s financial situation worsens.

“If, for some reason, the economy stalls again, we’ve got a safeguard in place, but — if what I believe will happen is we’re going to see significant growth and the trigger would accelerate the tax cuts,” Reynolds said.