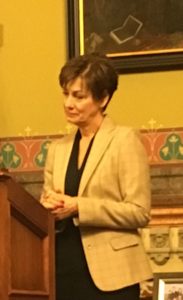 “We’re going to go through and look at what we’re doing, how we’re coordinating, how we’re communicating, what’s working well, what some of the shortfalls are,” Reynolds told reporters. “We’ll talk about who else we need to bring to the table.”

But Reynolds, a Republican, said the correct response to the Valentine’s Day shooting at a Florida school is “holistic” rather than solely directed toward gun-related measures.

The governor listed things like having more “active shooter” drills in schools as well as establishing a single public entry to school buildings. She’s also open to discussing the idea of a state law that would let law enforcement seize a person’s guns for three days, if there’s credible evidence they intend to do harm others or themselves.

“We just have to make sure we have due process in place also,” Reynolds said. “I mean, that’s really important, too, because as we’ve said even with the ‘watch list’ there are names that are on there that shouldn’t have been and it’s not very easy to get them off, so we just have to make sure. I don’t think that that’s unreasonable.”

Yesterday, a Democrat in the Iowa House proposed creating “extreme risk protective orders” to give Iowa law enforcement the authority to temporarily confiscate firearms from an Iowan who is suicidal or acting erratically, but he withdrew the idea before a vote could be taken. State Representative Art Staid of Cedar Rapids said he would bring the matter up “again and again” this legislative session.