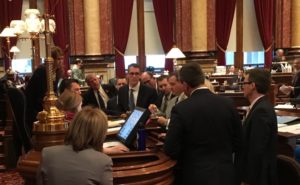 A bill that would ban nearly all abortions in Iowa after the sixth week of pregnancy has passed the Iowa Senate.

All 29 Republicans and the independent in the Iowa Senate supported the measure, which calls for charging doctors with a felony if they perform abortions after a fetal heartbeat can be detected. The only exception would be for abortions to save the life of the mother. Senate Democratic Leader Janet Petersen of Des Moines said the bill calls for “forcing motherhood on Iowa women.”

“I believe every Iowa woman should have the freedom to decide if and when she wants to become a parent,” Petersen said. “Unfortunately, that is becoming nearly impossible with Republicans in control of the Iowa Senate.”

Every Democrat in the Senate voted against the bill. The proposal now goes to the House. Republican leaders in the House have not publicly indicated whether it is a priority for passage.