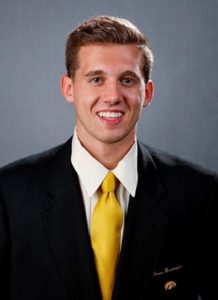 The University of Iowa men’s basketball team dominated on the glass and at the free throw line to post its first Big Ten Tournament victory since 2013.

“This was a very physical game and that’s what tournament play is,” said Iowa head coach Fran McCaffery. “Once you get to this point in the season, everyone is fighting.

“It’s a unique style that they play. They make you make plays; you have to be tough. I am proud of my guys.”

Sophomore Jordan Bohannon led a group of three Hawkeyes in double figures, finishing with 25 points on 6-of-10 shooting. Five of his six field goals came from 3-point range and he made all eight of his free throws.

Sophomore Tyler Cook had 19 points, making 6-of-8 field goals and 7-of-10 free throws, and freshman Luka Garza had 20 points and eight rebounds.

Iowa led 35-31 at the half after shooting 60 percent from the field, but Illinois stayed in the game thanks to 11 first-half Hawkeye turnovers.

Illinois then charged, using back-to-back 3-pointers from Tim Frazier and Michael Finke to trim the lead to 59-54. The Illini then closed the gap to a field goal at 61-59 and 63-61 before Iowa went on a 7-0 surge fueled by a Bohannon 3-pointer to get some breathing room.

The postseason energy saw the Illini make one final surge, closing the gap to five twice in the final 85 seconds, but the Hawkeyes staved off the rally to secure their 14th victory of the season.