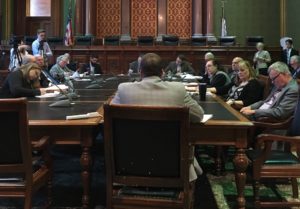 House Republicans today opened the public process of passing a tax cut package that’s fashioned after Governor Kim Reynolds’ proposal. Representative Peter Cownie, a Republican from West Des Moines, has been given the task of guiding the bill through the House. He indicated a committee vote on the bill wouldn’t happen until after March 16.

“I believe that will give good time to take input from Iowans, stakeholders, constituents and legislators,” Cownie said.

The first hearing on the House plan started about 15 hours after Republicans in the Iowa Senate passed their own tax bill. Drew Klein of Americans for Prosperity urged House members to pass “thoughtful and meaningful” tax relief.

“There’s more than one tax proposal moving in this building right now and, at some point, you guys are going to come together with your colleagues on the other side of the building and start to iron these things out,” Klein said.

The House plan, modeled after the governor’s, would cut personal income taxes by about $300 million a year when fully implemented. The Senate plan calls for reducing corporate taxes, too, and would amount to a billion dollars in total tax cuts per year. Business groups are lobbying the House to consider cutting corporate taxes. Jennifer Kingland, a lobbyist for the Iowa Taxpayers, mentioned the U.S. News and World Report ranking released this week.

“Iowa had the great honor of being named the number one state in the nation and we can’t help but also think we are number one in corporate income tax as well,” Kingland said during today’s hearing, “which is not a good thing.”

“We’re hopeful that we can include them in this conversation and find a way to mutually achieve our objectives there,” Stineman said, “but we believe this bill’s a great start.”

Groups representing teachers and unions registered their opposition to the tax cut plan, suggesting the state will be unable to meet its financial obligations and be forced to make drastic cuts in services.