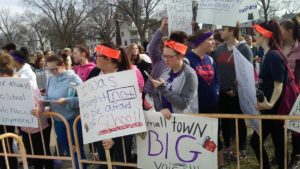 Several students spoke once they got to the building, voicing fears and concerns. The rally remained peaceful and students returned to class once it was over. The event’s organizer, Burlington High School senior Margaret Tillotson, hopes the students combined voices can make a difference. 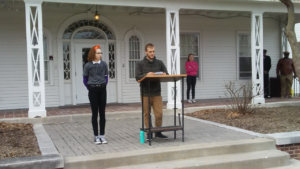 Eleven students spoke on topics ranging bullying, mental health concerns and a desire to have active shooter training for students at the school. Differing viewpoints were also applauded. Some students spoke of their fears of gun violence. Burlington student Cody Lee spoke against new restrictions on gun ownership.

“We don’t want our second amendment rights being infringed whatsoever,” Lee told KBUR. “We all have one goal down here and that’s to reach proper school safety and we have different ways of getting there.”

“A good process,” Coen said. “I’m proud of our students. They exercised their constitutional rights and I think we learned a lot.”

The student rally in Burlington lasted about two hours. About 300 students from a Des Moines high school staged a 20-minute protest Thursday in what district officials described as “non-academic time.”