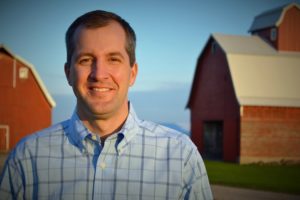 Iowa’s current deputy ag secretary will take over the reins of the agency when Iowa Agriculture Secretary Bill Northey leaves for a top USDA post.

Mike Naig has been the deputy secretary since September 2013. “It’s been an honor to serve as a partner with Secretary Northey to lead the Department of Agriculture over the last four-and-a-half years and I look forward to continuing to that work,” Naig said.

Governor Kim Reynolds on Thursday announced her intention to appoint the 39-year-old Naig to fill the remainder of Northey’s term. “We must continue to build momentum on our efforts around water quality and accelerate the adoption of conservation practices around the state,” Naig said.

The native of Cylinder, in northwest Iowa, already announced he’s running for state ag secretary in 2018. “We must also work to build new markets and expand markets for our crops and livestock we raise so well here in Iowa,” Naig said. “I’m looking forward to hitting the ground running.”

Northey was confirmed this week by the U.S. Senate to become Under Secretary of Agriculture at the USDA. It’s unclear when he’ll be leaving Des Moines for the job in Washington, D.C.

Naig will face as many as five other Republicans in this June’s Primary. There’s one Democrat who has announced he’s running for Iowa Secretary of Agriculture.