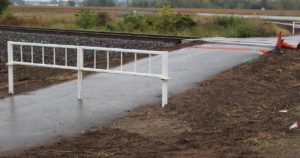 Freight trains that rumble through Muscatine up to a dozen times a day no longer blow their loud horns, thanks to a three-year effort to create a quiet zone in the heart of the eastern Iowa community.

City spokesman Kevin Jenison says the trains were rolling along at 45-miles an hour and the horns, which they were required to blow for safety reasons, were both distracting and deafening.

“The horns were a bit of a problem for local businesses who were trying to conduct their business and hold meetings,” Jenison says. “They would have to stop and wait for trains to pass.”

The trains pass through at all hours of the day, he says, and the noise was starting to impact the quality of life.

“We also have a growing residence downtown,” Jenison says. “More people are moving down there to live in the lofts that are being developed. It was a health issue for them. At least they would get a good night’s sleep if the trains weren’t blowing their horn.”

After three years of talks with federal officials, the state DOT and Canadian Pacific Railroad, the 1980s-era crossings for vehicles and pedestrians were upgraded with all-digital warning lights, gates, fences and barricades. Decreasing the noise level should mean an increase in the happiness of residents — and in their property values.

“There’s been several studies out there that indicate for every 10 decibels you drop it, you could potentially have up to a 5% increase in property values,” Jenison says. “The hope is that it’s going to ignite further investment in our downtown area and in neighborhoods that are within earshot of this quiet zone.”

The crossing upgrades were paid for by several community foundations and not the city’s taxpayers.

Muscatine is the 11th city in Iowa to get a railroad quiet zone. Others include Burlington, Cedar Rapids, Fairfield, Princeton and Sioux City.