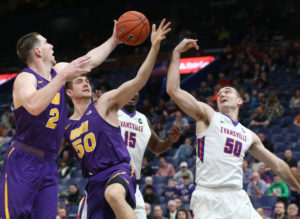 Northern Iowa’s Klint Carlson (2) controls the rebound against Evansville’s Blake Simmons in the second half of the Missouri Valley Tournament at the Scottrade Center in St. Louis on March 1, 2018. Photo by Bill Greenblatt/UPI

Lohaus’ jumper capped an 8-2 run for a 42-30 lead early in the second half, and Isaiah Brown’s layup put the Panthers up 53-41 with 2:27 left. Dru Smith, named to the Missouri Valley Conference Most Improved Team, scored eight straight and Evansville closed to 58-50 on his 3 with 20 seconds left, but Rhodes’ two free throws iced it for the Panthers.