You are here: Home / News / Governor says she and legislators can have a discussion about range of tax cuts 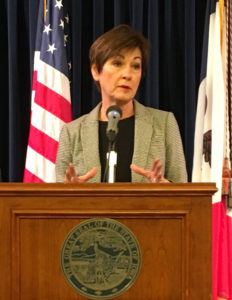 Governor Kim Reynolds seems to be leaving the door open to a bill that would cut the state income tax on corporations as well as reduce income taxes for individuals.

“I feel confident that we’re going to get something done with tax reform this legislative session,” Reynolds said late this morning. “This is part of the process. I started with a bill. The Senate has a bill and now the good work starts to take place where we can find consensus and things that we don’t agree on.”

In January, Reynolds used part of her “Condition of the State” message to ask legislators to delay any decision on corporate tax cuts until next year. In mid-February, Reynolds unveiled a bill to gradually cut individual income tax rates by 23 percent. Last week, a House subcommittee endorsed the governor’s plan, while Senate Republicans voted to reduce corporate taxes as well as income taxes for individuals.

Today, Reynolds was asked by reporters if she was open to the Senate GOP’s more expansive list of tax cuts.

“I just want to make sure that it’s sustainable and that we can honor our commitments for education and some of our priorities and we’re doing it in a fiscally responsible manner and, within that parameter, we can have a discussion about a lot of things,” Reynolds said.

A three-member state panel meets this Friday to re-evaluate the official projection of state tax revenue for the current year. If the panel increases its prediction of tax collections between now and June 30th, that would reduce or eliminate the legislature’s plan to cut the current year’s state budget to deal with lower than expect tax revenue.