You are here: Home / Human Interest / Tips for limiting the damage to your vehicle during pothole season 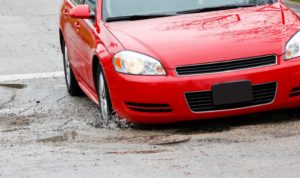 The freeze-thaw cycle of the past few months has brought a bevy of bone-jarring potholes to virtually every Iowa road.

Kelly Pargett, spokeswoman for State Farm Insurance in Iowa, says motorists can’t do much about the crumbling roads but we can try to protect our vehicles by chosing where and when we drive.

“Driving at night is harder so try to take well-lit roads so you can see the surface,” Pargett says. “Drive slower than you normally would. Give yourself a chance to see the potholes and avoid it before you’re into it.”

Some Iowa roads already more closely resemble moonscapes and Pargett says one key to keeping out of those concrete craters is to increase your following distance.

“Tailgating does make it worse,” she says. “There can be a lot of driving issues and driving hazards from tailgating, more than just not seeing potholes. Certainly, give yourself a chance to see what’s ahead of you so you can try to avoid the pothole as much as you can.”

As always, avoid distractions like cell phones, navigation systems and the radio. Pargett says keep your eyes on the road and get ready to brake.

“If you can’t avoid the pothole, we do recommend trying to brake before you hit the impact because it’s less damage to your axles and tires,” she says. It may be better for the suspension, too, if you brake before hitting the hole versus skidding over it.

Pothole damage can quickly rise into the hundreds of dollars, though many insurance companies cover it under the collision portion of the policy.