You are here: Home / Agriculture / Governor says a trade war would be devastating to ag economy 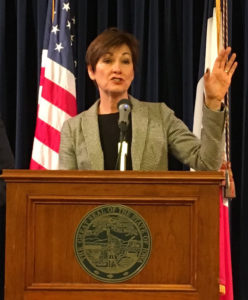 Iowa’s Republican governor and the state ag secretary who just resigned to join the Trump Administration both say there’s concern in “farm country” about changes in U.S. trade policies.

On Monday, President Trump tweeted that the only way Canada and Mexico get exempted from new tariffs on steel and aluminum will be if the North American Free Trade Agreement is renegotiated. Governor Kim Reynolds said she’s made it clear to members of Trump’s cabinet that “instability” in trade relationships will have a negative impact on Iowa’s farmers.

“I’ve made it pretty clear where we stand on that,” Reynolds told reporters during her weekly news conference. “….Especially, the fragile economy that we’ve had with the farm economy. With commodity prices under input costs, this is something that we monitor very, very closely.”

Reynolds indicated she is “o.k with” renegotiating trade deals, but since Canada and Mexico are Iowa’s two leading trade partners, she opposes abandoning NAFTA.

“The impact that would have on our state and midwestern states and, really, states all across the country — but I’m focused on Iowa, would be devastating,” the Republican governor said.

Reynolds said when she and the Republican governors of Michigan, Tennessee and Arkansas met with Trump Administration officials in October, they suggested ways the president could “win” at trade. Reynolds also is warning any economic growth from the federal tax cuts would be erased if NAFTA is dissolved.

President Trump often mentioned the federal trade deficit as he campaigned for the White House and he’s recently tweeted that a “trade war” would be easy for the U.S. to win. According to the governor, comments like that create “uncertainty” in the economy and Reynolds says she has “tremendous concern” about a trade war. 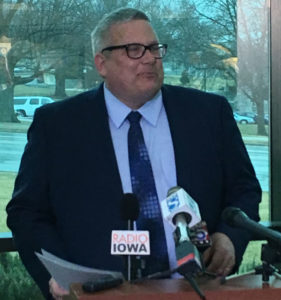 “Our farmers are the first target…andwe know that’s where the unintended consequences will fall…on our farmers and our manufacturers,” Reynolds said.

Bill Northey resigned as state ag secretary yesterday and will be sworn in this evening as an undersecretary in the U.S. Department of Agriculture. Northey told reporters yesterday President Trump’s tweets won’t be in his “field of vision.” Instead, Northey indicated he’ll be taking direction from U.S. Ag Secretary Sonny Perdue.

“Certainly you’ve heard the secretary continue to say, and the president as well, that trade is important,” Northey said. “We need to improve trade. We need to increase trade. We need to do it in a fair way. There (are) concerns…when you have uncertainties, about where everything’s going in the future.”

And Northey said everyone “in farm country” understands the importance of trade — and the threat posed if other countries retaliate with tariffs on raw commodities like soybeans and on made-in-Iowa products like grain bins and tractors.