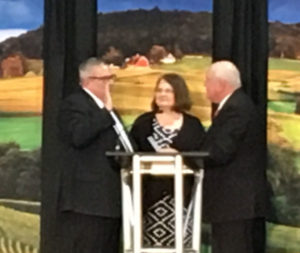 Northey takes the oath from Perdue.

A day after resigning as Iowa’s Secretary of Agriculture, Bill Northey took the oath of office for a federal job.  Northey is now an Undersecretary in the U.S. Department of Agriculture.

After the event, Perdue told reporters Northey will be in charge of organizing and consolidating some agencies within the U.S.D.A. — that includes the Farm Service Agency, the Natural Resources Conservation Service and the Risk Management Agency.

“So we can have a one-stop shop for farmers where they can come in and get answers. Their databases need to coincide and work together, get our IT working and there are a lot of challenges out there and we’re going to do it,” Perdue said. “We’re both sooner-rather-than-later kind of people.”

Northey delivered a 15-minute speech at the banquet. He started with a thank you to Iowans who supported him and near the end Northey thanked his sister and her husband for taking over his farming operation near Spirit Lake.

“I couldn’t be more excited to be able to work for all of you at U.S.DA.,” Northey said, “…and to serve in a way that certainly magnifies or is an example of the support that you all have shown me through the years and certainly in the last four months.” 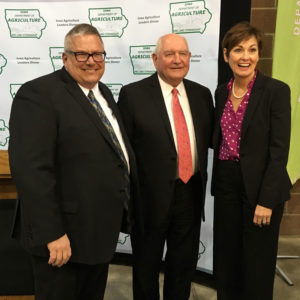 In early September, President Trump nominated Northey to be Undersecretary for Farm and Foreign Agricultural Services. A committee in the U.S. Senate endorsed his nomination in October, but Texas Senator Ted Cruz held up a senate vote on Northey as leverage for changes in the federal ethanol production mandate. Perdue told the crowd Northey had “finally been liberated from the U.S. Senate” last week.

“In case you have any questions about it, Bill Northey, Sonny Perdue and Donald J. Trump stand for the (Renewable Fuels Standard), unequivocally,” Perdue said and the crowd gave that statement a standing ovation.

Perdue called Northey an “evangelist” about what’s working in Iowa agriculture and someone who has the “moxie to get things done” in the U.S.D.A.

“I frankly have been congratulated so much tonight over Bill Northey, I feel like I’m getting married,” Perdue quipped and the crowd laughed.

This was Perdue’s fourth visit to Iowa since he was sworn in as U.S. ag secretary last April. It’s his first since President Trump announced tariffs on steel imports and tweeted about winning a trade war. During a question-and-answer session with reporters, Perdue was asked how Iowa farmers who may be “spooked” by those developments should react.

“Pray,” Perdue responded, laughing. “…President Trump is a unique negotiator and sometimes he keeps people off-balance, even his own staff sometimes…He certainly did that this last week…He believes solely in his heart ‘America first’ and the American people first and that includes American agriculture.”

Perdue told reporters he and others are working “feverishly” with the president on trade issues. Perdue suggested Trump’s unconventional comments may have positioned the U.S. for a breakthrough in the renegotiation of the North American Free Trade Agreement.