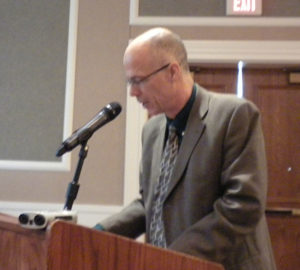 He says groups from across America hold conferences, air public service announcements and host screening days among many other activities to bring awareness to problem gambling. He told the Iowa Racing and Gaming Commission that it is the 14th annual National Problem Gambling Awareness Month.

“Calls to problem gambling helplines jump by an average of 30 percent during the month of March — proving that Problem Gambling Awareness Month and related activities make a measurable and meaningful impact — not only here in Iowa, but also nationwide,” Preuss says. Preuss says one of the keys is educating people on the things that indicate there might be a problem.

“Signs of problem gambling include increasing preoccupation with gambling, a need to bet more and more frequently, restlessness or irritability when attempting to stop,” Preuss says, “chasing one’s loses, the lost of control manifesting by the continuation of gambling behavior in spite of the mounting serious and negative consequences.” Preuss says there is a wide variety of consequences from those who can’t stop gambling.

“In extreme cases, problem gambling can result in financial ruin, legal problems, loss of career and family, and in some cases — even suicide,” according to Preuss. He says for the small percentage of those who have a gambling problem, there is hope.

“The good news in all of this is that we have the Iowa Gambling Treatment Program. Treatment works and recovery is possible,” Preuss says. Studies have shown those who call for help see results.

“Ninety-two percent reported fewer signs of problem gambling at discharge than on admission. And among those who entered treatment having gambled 30 days prior to treatment — the mean number of days gambled decreased from about eight days — to less than one day at discharge,” Preuss says. Preuss says anyone who feels they may be a problem gambler is urged to call 1-800-BETTS-OFF to get help.