You are here: Home / News / Pence says economy has ‘taken off’ since tax cuts passed 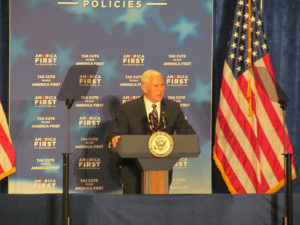 “President Trump promised over the course of the campaign that we’d cut taxes across the board for working families and job creators large and small,” Pence said. “And just over two months ago President Donald Trump signed the largest tax cuts and tax reform in American history and our economy has taken off every day since.”

Pence took the stage by saying, “Hello Iowa!” quickly followed by a “Hello Nebraska!” Pence told the crowd businesses now have “unprecedented opportunities” to pass tax savings onto their employees.

“We believe workers in Iowa and Nebraska can expect to see pay raises,” Pence said. “…We’re already on the way.”

About 500 people attended the event organized by America First Policies. The group was formed to tout the president’s accomplishments and has scheduled a series of rallies around the country focused on tax policy. Pence, however, addressed other pressing issues of the day, including news that North Korea is willing to talk about ending its tests of nuclear weapons.

“We’ll continue to apply maximum pressure to the Kim regime until we see North Korea take credible and concrete steps towards denuclearization,” Pence said. “We will remain firm in our resolve and we will continue to stand strong until North Korea abandons their nuclear program once and for all.”

Pence also addressed the president’s proposed trade tariffs on steel and aluminum imports. The vice president described it as a “crackdown” on unfair trade practices.

“Now, the president said earlier today the United States has been taken advantage of for too long by too many countries when it comes to trade,” Pence said. “…Whether it be in renegotiating NAFTA or protecting our steel and aluminum industries, President Trump is always going to put American workers, American companies and American farmers first.”

About a dozen Democrats staged a protest outside the venue. They accused the vice president of “spreading a misleading message about the “GOP tax scam.”