Dozens of outdoor monuments, statues and works of art on the state capitol complex in Des Moines need an estimated half a million dollars worth of repairs.

The Iowa Capitol Planning Commission has begun raising money for that upkeep — quite literally brick by brick. “These bricks are the original dome bricks, constructed in 1881,” Carol Grant of West Des Moines, a member of the commission, said this morning. 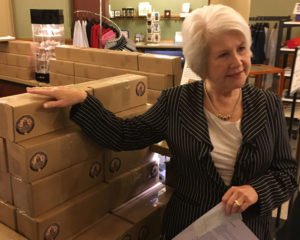 The capitol dome is being repaired and 500 of the bricks that are being replaced have been boxed up and are being sold for a $100 donation. The money will be used to repair monuments on the capitol grounds.

More than 12,000 bricks are being replaced in the state capitol dome, but most of those bricks “came out in pieces.” No more than 1,200 of the bricks have been intact and being made available for this fundraiser. 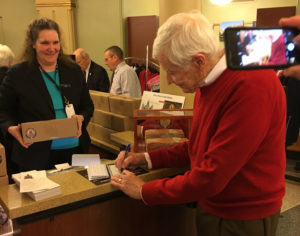 Bill Dikis, the chairman of the Iowa Capitol Planning Commission, is an architect from Des Moines who bought a brick this morning. He said a lot of people are surprised when they learn there’s brick in the support structure for the state capitol’s golden dome.

“Those are curved iron ribs and then the brick in a compression in a vault kind of way between the ribs. There’s also some horizontal iron bands that hold it all together,” he said, “so it’s well-made, but 140 years later, or whatever this is, it’s bound to have a little repair necessary.”

The money from the fundraiser is likely to be used to restore the historic “Soldiers and Sailors” Monument erected in tribute to Iowa veterans of the Civil War. Legislators have pledged to match each $100 brick donations with $50 in state tax money.

Representative John Landon of Ankeny was involved in clearing all the legal hurdles so the fundraiser could happen.

“It’s a very rare event where we get to offer a piece of history for sale,” Landon said.