You are here: Home / Crime / Courts / Casinos in Clinton and Jefferson pay penalties for violations

State-licensed casinos in Clinton and Jefferson will pay $5,000 penalties for violating the rules for gamblers who banned themselves.

The Wild Rose in Clinton sent a mailing out in September to a person who had signed up for a self-ban in February of 2017. General manager Steve Nauman apologized to the Racing and Gaming Commission and says they take the self-ban issue seriously.

“We’ve spent countless hours to go through this program. We have made some changes, some safeguards,” Nauman says. “This happened when our marketing coordinator…failed to pull a new list,” Nauman says. He’s referring to the list of players who have banned themselves that is used as a reference. He is hoping the changes made in the system will prevent any future problems. “Now the marketing coordinator cannot send out emails until it is proven that she has pulled the new list and our marketing manager needs to sign off on it,” Nauman says.

The Wild Rose in Jefferson also had a violation as a person who had signed a self-ban at another casino was allowed to sign up for a player card at the Greene County facility. General manager Travis Dvorak apologized and said the casino has taken steps to correct the problem.  He says they did an audit and looked at procedures and have retrained all employees in the importance of reviewing identification.

Dvorak says they’ve taken other steps too, which includes the head of security becoming a trainer in I-D identification.  “We’ve also implemented a new audit procedure which we have communicated with our local rep. We will be doing a monthly audit of the state ban list to our internal control system….,” Dvorak says. “We’ve also taken addition steps for training.” 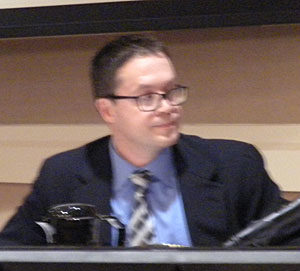 Iowa Racing and Gaming Commission administrator Brian Ohorilko says the rules governing the self-ban are being reviewed after several recent violations.  Ohorilko says the commission staff created a task force to evaluate all the procedures used to prevent people on the list from receiving marketing materials.

He says they also recently visited with the casino operators.  “To see what’s working well and maybe what’s not working so well,” Ohorilko explains. “At the end of the day the goal is to create a best practices document that can be shared with all of the licensees.”

The casinos face an administrative penalty from $5,000 to $20,000 for a violation of the self-ban rules. The severity of the penalty depends on the number of violations within a calendar year.