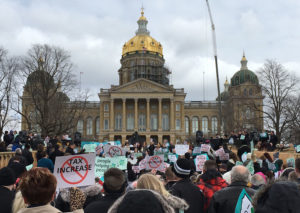 Hundreds of credit union members flooded the statehouse today to lobby against a tax increase on credit unions.

Calderon told the crowd her parents fell victim to the “predatory lending practices” of banks, but her family became financially stable and she was able to go to college after they became credit union members.

“Thank you for your mission and for living up to the people helping people philosophy because that’s why we’re standing in front of you today. That’s why all of us are here,” Calderon said. “We cannot let this tax increase affect our credit unions.”

Senate Republicans passed a wide-ranging tax bill last month that included a hike in credit union taxes. A Republican member of the Iowa House who opposes that move spoke during the rally.

“During my second campaign I had a friend of mine come up to me and say: “Why do you support credit unions?’ And I said: ‘Well, do you know what they do? They’re a co-op, non-profit — that their profits go right back to their members.’ I said: ‘I love that model. I believe in that model and that’s what I’m going to support,'” Representative Walt Rogers of Cedar Falls said. 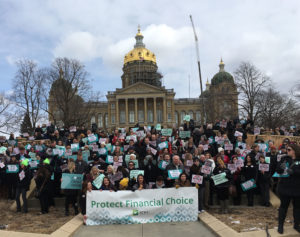 One woman yelled: “Thank you!” as the crowd cheered.

Former Iowa Congressman Jim Nussle, a Republican who is now CEO of the Credit Union National Association, spoke directly to the Republican leader in the Iowa Senate.

“Let me tell you, Majority Leader Bill Dix: When you tax a credit union, you’re taxing Iowans — 600,000 of them — and we’re here to tell you that’s not fair and we’re not going to stand for it,” Nussle said and the crowd cheered.

Iowa Credit Union League president Pat Jury directly mentioned the political confrontation between banks and credits unions that has prompted each side to air an array of radio and TV commercials to press their side of the argument.

“Credit unions even help bank customers save money by providing competition that forces banks to keep their rates consumer friendly,” Jury said at the rally, “and more and more Iowans are choosing credit unions for their financial services and banks don’t like this.”

After the rally concluded, the crowd walked up the steps to speak with their senators and representatives.

A spokesman for Senator Dix issued a written statement later in the afternoon.

(This post was updated at 3:20 p.m. with additional information.)