You are here: Home / News / Kim Reynolds kicks off her 2018 gubernatorial campaign (AUDIO) 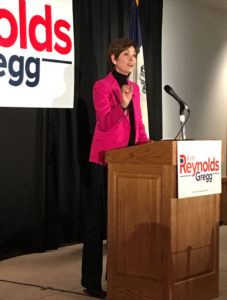 After eight months in the job, Governor Kim Reynolds formally announced tonight in Osceola that she is running for a full, four-year term as governor.

Reynolds, a Republican, took over as the state’s chief executive when Terry Branstad resigned last May to become the U.S. Ambassador to China. Reynolds told a hometown crowd she never imagined she’d be chasing this dream.

“I didn’t set out to become governor, but that’s what I love about Iowa,” Reynolds said, he voice shaking with emotion. “If you’re willing to work for it, again, anything is possible. I believe in the amazing opportunities we’re creating here because I know what it takes to keep us on top and I won’t rest — we won’t rest — until we’ve done everything we can to build an even better Iowa.” 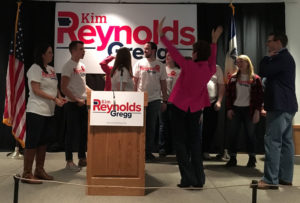 Reynolds told the crowd she’s “never satisfied with the status quo” and is committed to building a “better Iowa.”

“That’s why tonight, in a town where Kevin and I raised our girls, in a place where we made so many friends and know the importance of community, where I learned about public service, I am excited and enthusiastic to be your governor for another four years,” Reynolds said.

Before a two-year stint as a state senator and her tenure as lieutenant governor, Reynolds served 14 years as Clarke County Treasurer. She hired Debbie Lynn as a deputy.

“She’s an awesome lady and she’ll do a great job,” Lynn said during an interview. “I think she’s doing a great job right now. I’m so proud of her every time I see her. Whether it’s personally I see her or she’s on TV, she’s just spot on.”

Lynn replaced Reynolds as Clarke County Treasurer. She was among the crowd who gathered in a building on the Clarke County Fairgrounds for what the Reynolds campaign billed as a “special announcement.” Chuck DeVoss, pastor of the church the Reynolds family has attended for 26 years, was in the crowd.

“She’s a woman that knows what she wants. She’s an excellent leader,” DeVoss said during an interview. “…She listens…I’ve known leaders in the past that didn’t want to hear anything anyone else had to say and next thing you know they’re surrounded by people who have nothing to say. She’s not that person.” 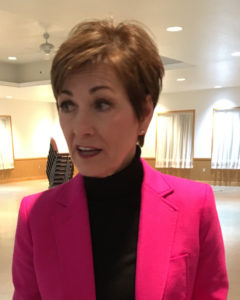 Reynolds was introduced at the event by her husband, Kevin, then she delivered a short, 12-minute speech. After the crowd left, Reynolds gathered her campaign team on stage for a photo and a brief pep talk. She told reporters it had been an emotional evening.

“This is a really special place. We raised our kids here and they just — I’m going to get emotional again — they always show up and I’m just really, really grateful for that,” Reynolds said. “You know, we went through some tough times down here, too, and they stayed behind Kevin and I. Really special people, a special town and we’re very blessed.”

Reynolds indicated she wants to “build on” the Branstad record and her own brief tenure as the top administrator in state government. She and her running mate, Adam Gregg, frequently mentioned Iowa’s top ranking in an analysis of the 50 states done by the staff of U.S. News magazine.

Reynolds faces a GOP Primary challenge from former Cedar Rapids Mayor Ron Corbettt. She did not mention Corbett or any of the Democrats who’re running for governor as well. The chairman of the Iowa Democratic Party issued a written statement after Reynolds formally declared herself a candidate. Troy Price accused Reynolds of “putting her special interest donors and political cronies ahead of the good of our state.”

(This post was updated at 7:46 p.m. with additional information)