You are here: Home / Sports / Wigginton named to the USBWA All-District team 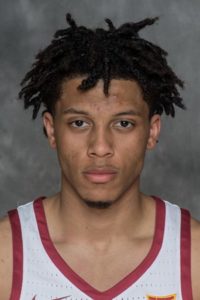 Wigginton, a Dartmouth, Nova Scotia native, leads the Cyclones averaging 16.6 points in his rookie campaign. He has scored 20 or more points in 12 games this season, which is an ISU freshman record. He also has set the Cyclone rookie record with 67 three-pointers.

Wigginton became just the eighth freshman in Big 12 history to score more than 300 points in conference play, joining the likes of Andrew Wiggins and Kevin Durant.

Last weekend, Wigginton was named to the Big 12’s All-Newcomer Team as well as being recognized as an All-Big 12 Honorable Mention selection.