You are here: Home / Agriculture / Ernst says with farms ‘barreling toward crisis,’ president should reconsider tariffs 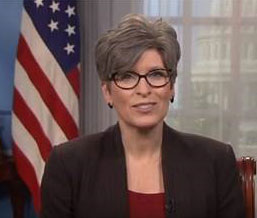 “This threat of retaliation is a reality. History has shown that retaliatory tariffs are often targeted at agriculture,” Ernst said. “Our farmers are deeply fearful and I share their sentiment.”

For example, Ernst noted China is the largest buyer of U.S. soybeans and may choose to buy beans elsewhere after the tariffs take effect.

“With already low commodity prices, farms are barreling toward crisis. There are other countries that are ready, filling and able to fill the food product demands of China and other nations that seek to buy U.S. agricultural exports,” Ernst said. “Iowans cannot afford a trade war.”

Trump — over the objections of fellow Republicans like Ernst — signed an order this afternoon that will impose the tariffs later this month. Ernst released a video statement shortly afterwards.

“You cannot build a grain bin out of a paper bag or plow a field with a toothpick,” Ernst said. “You see, our farmers rely on steel and aluminum for the products and equipment that make farms work. Imported products like these are used to keep farm operations moving and making money.”

Ernst warned the tariffs will trigger higher prices on farm equipment and other product and “drastically increase the cost of doing business.” Ernst cited notable Iowa manufacturers like John Deere, Vermeer, Lennox and Des Moines Steel as companies that would be hit with higher production costs.

“As Iowans know, free and fair trade is not just a lofty Washington principle,” Ernst said in the video statement. “It is at the core of Iowa’s economy and sustains our families and farms.”

Ernst said she agreed with President Trump “on many things,” but she warned tariffs will prompt customers in other countries to buy elsewhere.

“I couldn’t agree more when the president has said that the U.S. should be its own boss when it comes to driving our trade policies, but America must understand its customers,” Ernst said. “…We simply cannot afford to be the over-priced boutique when the store down the street is selling the same goods at a discount price. We will lose every time.”

Ernst and the rest of Iowa’s congressional delegation sent Trump a letter Wednesday, pleading with the president not to take the action he took today.