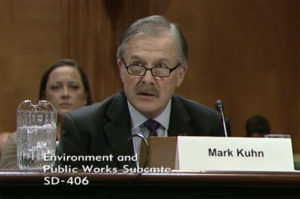 A farmer and member of the Floyd County Supervisors testified before a U.S. Senate subcommittee today and spoke against a change that would exempt large-scale livestock producers from penalties and from reporting hazardous air emissions.

Mark Kuhn  says Iowa State University and the University of Iowa conducted a study on emissions from Concentrated Animal Feeding Operations (CAFO) in 2001. “Based on an analysis of peer-reviewed, duplicated, legitimate and published scientific research, the consensus of the entire study group was that hydrogen sulfide and ammonia should be considered for regulatory action,” Kuhn says. He told the senators the Iowa Legislature approved and then Governor Tom Vilsack signed into law new livestock regulations in 2002 which gave the Iowa Department of Natural Resources (DNR) authority to develop air quality rules.

Kuhn says each time the air quality rules came forward, there was opposition. “In March 2004, the industry introduced through friendly legislators a bill to set air emission standards. The bill passed by the legislature, but was vetoed by Governor Vilsack,” Kuhn says. “In his veto message Vilsack stated the bill represented a significant step backwards because it would not have adequately protected the health of Iowans, and it would have set a standard so lenient that it would undermine the credibility of the CAFO industry.”

Kuhn says nothing has changed in Iowa since the air quality study was released 16 years ago — with two key exceptions — the number of CAFO’s has increased and hog production is set to also increase. “It is clear to me that the CAFO industry is opposed to any air emission regulation. It intends to continue business as usual as long as state elected officials in Iowa allow it,” Kuhn says.

He talked about Jeff and Gail Schwartzkopf who bought a house in the country near Rudd four years ago and how livestock operations built nearby “changed their lives forever.” “This isn’t a rural versus urban issue. It affects all Iowans. It pits neighbor versus neighbor. All too often, it pits farmer versus farmer,” Kuhn says. “Please be assured small family farms will not be affected by any air emission reporting requirements. The CAFO industry in Iowa is industrialized, factory farm agriculture.”

Kunn asked the Senators to keep the regulations in place “The Schwartzkopf family is surrounded by three large CAFOS. They should be protected from toxic air emissions that impact their health and diminish their quality of life. But Iowa lawmakers refuse to act,” Kuhn says. “So now it’s up to you to protect their access to air information.”

A cattle rancher and a representative of the chicken industry also testified in the hearing. They both asked that the livestock industry be exempt from the emissions requirements. Cattle ranch owner Todd Motenson said, ” I cannot support needless requirements that burden the agricultural community while providing no environmental or public health benefit.”