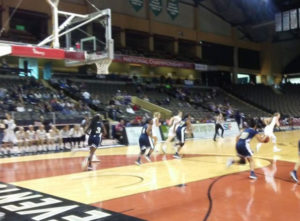 While fans of the state’s four major college basketball programs aren’t going to get to cheer them on in the NCAA Tournament — residents of one western Iowa city have plenty of tournament action to watch in their own back yard.

The opening round of the NAIA women’s Division Two National Basketball Tournament got underway Wednesday in Sioux City. Thirty-two teams and hundreds of fans and families of the players are filling almost every hotel room in the city. City council member Rhonda Capron says they take a lot of pride in hosting the tournament.

“It’s just huge, we love doing this every year because it’s a camaraderie of people who come from out of town from in town. I’ve been a sponsor for many, many years,” Capron says. “We enjoy our teams, we embrace them like they are our owns kids so the parents know that they are being taken care of — and we have a great reputation — that’s what it’s all about.” Local businesses adopt and sponsor each participating team

“We take them out to eat, we would take them to different places in town to just show off our city. We always make sure that when we take them some place that it was an in-town business,” Capron says. The hometown favorite Morningside Mustangs take to the court in their opening game around 7 p.m. at the Tyson Events Center.