You are here: Home / Human Interest / Iowan creates program to help those with intellectual disabilities learn to cook 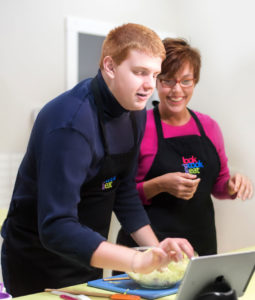 “They’re very good at computers and I’ve found a lot of them to be visual learners,” Hoss says. “Because of its visual components, photographs, videos and voiceovers, there are a lot of things they can grab onto really fast.” Hoss’ sister was born with an intellectual disability and Hoss helped to launch a church coffee shop in Des Moines that employs and empowers people with disabilities.

Being able to prepare a meal is an important ingredient for living independently and Hoss says the step-by-step program makes healthy meal preparation fun and easy.

“They have access right away to over 150 recipes,” Hoss says. “Each recipe has images of all of the foods that you need to make the dish. No more than nine ingredients in any recipe to keep things really simple.” 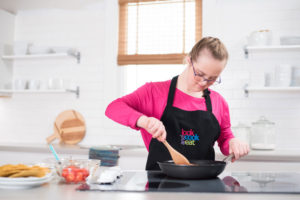 Each recipe includes up to three short videos and a complete list of all tools and utensils required, also, no more than nine. The new program is already drawing interest from across the state and around the globe, with users as far away as Great Britain, Australia and Israel. Hoss has plans to continue expanding Look, Cook and Eat, adding new recipes monthly.

“We would like to build the company itself so we can hire people with disabilities to actually be the people that do that work behind the scenes or in front of the camera,” she says. Eventual goals include broadening the service beyond cooking to include more lifestyle lessons in topics like exercise and wellness, etiquette, artwork and gardening.