You are here: Home / News / Iowans are needed to help provide readings on rainfall, snowfall 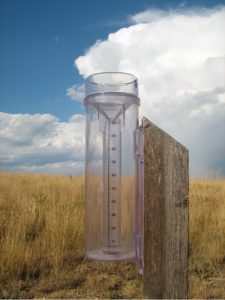 State climatologist Harry Hillaker says they need people with an interest in the weather who can purchase a four-inch diameter rain gauge, set it up in a suitable location and post their daily readings on the internet.

“That data gets used for a variety of purposes,” Hillaker says. “It helps the National Weather Service issuing flood warnings when there’s unusual rain events occurring in places other than where official weather stations are at. It also helps on the other end of the spectrum as far as drought conditions and just how dry things are.”

On a typical day, making the observations and recording them should only take a few minutes. Hillaker says it may not sound like a big deal, but these volunteer observers play a key role in helping better document the amount and variability of rain and snow.

“We’ve got quite a number in Iowa, about 300 or so that are fairly active observers, but we could definitely use way more than that,” Hillaker says. “If you look at the national map of observation points, Iowa looks a little bit sparse compared to surrounding states.”

The multi-state group is known as CoCoRaHS (CO-co-roz), the Community Collaborative Rain, Hail and Snow network. It was launched in Colorado in 1998 and is now in all 50 states and Canada. Joining the network of observers is free, but specific equipment is a must.

“There is a particular type of rain gauge that is used, not the least expensive thing, roughly $30 to 40 to get that gauge that’s required so an inch of rain in Iowa means the same thing as an inch of rain anywhere else,” Hillaker says, “and the type of gauge does make a difference.”

Weather observers are needed everywhere in Iowa but the most critical needs are in: Adair, Adams, Allamakee, Bremer, Cedar, Decatur, Greene, Keokuk, Louisa, Monroe, Shelby, Worth and Wright counties.