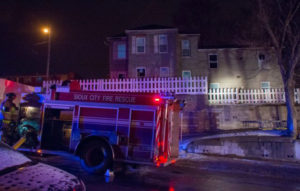 A teenager died after being taken from this burning Sioux City apartment.

The Sioux City Fire Department says 16-year-old Misael Gonzalez Valasquez died at the Nebraska hospital where he was taken after the fire. He was found in a burning apartment early Sunday and was rescued by firefighters. Rescuers say he suffered severe burns and smoke inhalation and was resuscitated twice before being taken to a Sioux City hospital and then flow to the St. Elizabeth Burn Center in Lincoln, Nebraska.

Sioux City Police and fire department investigators determined the fire was accidental, though the exact cause remains under investigation. Thirteen other people in the building got out safely.