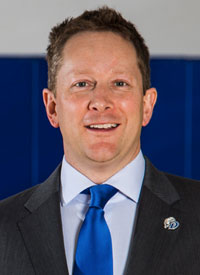 The Drake University men’s basketball team earned an 80-73 overtime victory over Abilene Christian in the first round of the CollegeInsider.com Postseason Tournament (CIT) to win the Lou Henson Classic Monday afternoon at the Knapp Center.

Drake’s Ore Arogundade (Chicago, Ill.), who was named the Lou Henson Classic Most Valuable Player, posted a career-best and game-high 25 points as he made 8-of-10 from the field, including 4-for-4 from beyond the arc. Nick McGlynn (Stoughton, Wis.) added 22 points, while grabbing seven rebounds and matching a career-high four blocks. C.J. Rivers (Cahokia, Ill.) grabbed a career-high 10 rebounds to go with four assists, three points and two steals, many coming in overtime to seal the win in front of a crowd of 3,565.

The first half went back and forth for the first 15 minutes with Drake earning a 24-18 lead off a fast break layup by Jalen Gibbs (Waldorf, Md.) and forcing ACU to take a timeout. Out of the timeout, the Wildcats managed to stop the Bulldog run and scored the final four points of the half to tie it up 28-28 at intermission.

The Bulldogs came out of halftime strong and took a five-point lead, 33-28, off a three-pointer by Arogundade and a layup by De’Antae McMurray. Drake pushed its lead to 10 points, 40-30, with 15:28 left to play.

The Bulldogs managed to keep the Wildcats from making a big run over the next 12-and-half minutes and held on to a 10-point lead, 69-59, with two minutes left to play.

The Wildcats made one final push and ramped up the defensive pressure in the final two minutes, forcing two turnovers and Drake to take a contested three-pointer as the shot clock winded down and cut their deficit to two points, 69-67, with less than a minute to play. ACU’s Jalone Friday missed the go-ahead three-pointer, but B.J. Maxwell came up with an offensive rebound and made a five-foot jumper to tie it up, 69-69, with 11 seconds left in regulation.

The game went into overtime as Drake missed a game-winning three-pointer in the final seconds.

In overtime, the Bulldogs took the ball inside to McGlynn, who scored five of Drake’s 11 overtime points, and earned a 77-73 lead with just less than a minute to play. Drake went to hold ACU scoreless in the final minute and made its free throws down the stretch to seal the 80-73 victory.

The Bulldogs will play a second-round CIT game against an opponent to be determined and a date to be announced.