You are here: Home / News / Key senator says nothing illegal about ex-GOP leader’s actions with lobbyist 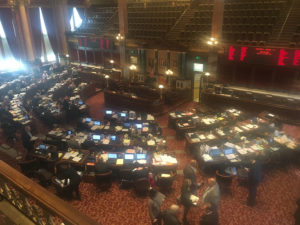 It seems unlikely Monday’s dramatic resignation of a married state senate leader caught on camera kissing a lobbyist will prompt an investigation or any procedural changes in the senate yet this year.

On Monday, the political website Iowa Starting Line published images of Senate GOP Leader Bill Dix and a lobbyist for the Iowa League of Municipalities kissing in a bar. Dix resigned from the senate a few hours later. Senator Pam Jochum, a Democrat from Dubuque, who is a member of the Senate Ethics Committee, today said it’s time to “look deeper” at the rules that govern the behavior of senators.

“We’re called honorable,” Jochum said, “and that means our behavior should be honorable and certainly the behaviors that have been exposed in the last 24 hours are anything but that.”

Jochum said no one knows whether “a relationship between” the lobbyist and the now-former majority leader may have influenced which bills were considered and which were tabled. Breitbach said Dix did not have that kind of veto power over his Republican colleagues who make up the GOP “Caucus” in the senate.

“Here’s the thing: everybody thinks that one person has control over a particular caucus,” Breitbach said. “That’s not the way our caucus works. We’ve got 29 leaders from the state of Iowa come together to make up this caucus.”

After Dix’s resignation Monday, there are 28 Republicans in the senate. One of the 28 remaining Republicans is Senator Jerry Behn of Boone, chairman of the Senate Ethics Committee. He said no complaint has been filed about the situation.

“I’m not aware of anything and certainly nothing has been brought to me,” Behn said.

Behn added that the Ethics Committee no longer has jurisdiction to sanction Dix, since Dix is no longer a senator. Behn said it’s also unclear whether Lindsey McCune remains a registered lobbyist for the League of Cities. A spokesman for the organization has told other media it cannot address that question, because it’s a personnel issue.