You are here: Home / Fires/Accidents/Disasters / Hogs die in Des Moines after truck tips over 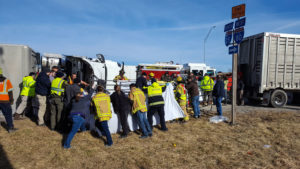 The semi was hauling around 140 hogs in a trailer, which tipped over while exiting Interstate 80. The driver was not injured, but according to the Animal Rescue League of Iowa, 10 of the hogs either died in the crash or had to be euthanized.

ARL volunteers, using a makeshift fence, helped guide the rest of the hogs into another trailer.